Born and raised in Monrovia, California – Lauren Armenta is a graphic designer who specializes in branding, illustration, and packaging. She is a recent graduate from Chapman University with her BFA in Graphic Design and Minor in English. She is looking to gain creative experience and be a part of a team.Contact at TagYoureItDesign@gmail.com

In the past posts, I have related street art to various theories and have touched on topics such as visual communication to which you can refresh your memory on my previous posts here.

Quick Refresh (for those who were too lazy to click on the link), Visual communication is expressing ideas and experiences with a combination of imagery and textual content to communicate a message to a viewer.

However today we are switching gears to place street art and graffiti with video gaming. We are going to go more in depth to connect street art to Bogost’s theoretical frame of procedural rhetoric within video games that are inclusive of street art.

Video games are awesome, anyone can take on the persona of another and fight battles or build a farm or practically anything. Today’s games exist to which an almost alternate reality is created for us when we see real life people and places recreated for a gaming experience. Video games are a form of persuasion and expressionism, drawing in a person to interact and creates a model that represents cultural, social, and ideological realities.

Graffitier (A site where you may spray paint or use paint marker virtually to tag any surface. Including a woman’s back) Example below: 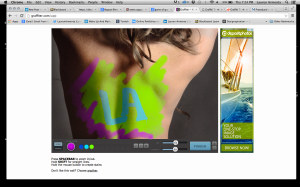 Graffiti Time (a game where you jump walls, avoid cops and tag places to get keys to unlock the next tagging location) Example below: 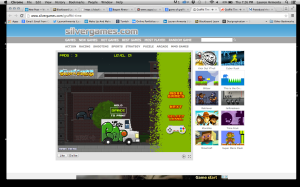 Many other graffiti or street art games incorporate tagging. For example sites where they provide a picture location of trains, walls and other places with an assortment of digital spray cans and paints to create virtual street art or tags.

Street Art and public opinion has come a long way. One example of real life gaming with street art is the newest Oxygen buzz of Street Art Throwdown where a group of artists are in competition for 100,000 dollars while thrown into a series of difficult obstacles that push their skills to the next level. 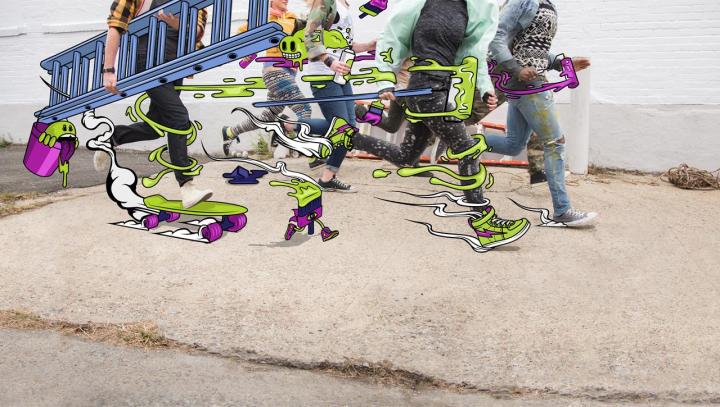 Looking at Bogost’s framing of procedural rhetoric, we first break down the word procedure. It can be described as something following a structured behavior. Procedure often is given a less positive meaning because it is often used in negative examples. However procedure is tagged (pun intended) with official standing and bureaucracy. In contrast to that, it can also limit our way of thinking due to focus on structure that procedures provide.

Now, rhetoric can be defined as effective or persuasive expression in writing and speech to communicate what the author wants while captivating an audience.

So then what does this have to do with video games and street art?

Bogost tied the persuasive power of video games to the ability they have to recreate and support cultural and social positions (tagging scenario, social opinion of street art = vandalism) but can disrupt that belief by letting you alter that reality. Therefore having this manipulation can lead to a social change for those positions.

One game, Graffiti Time, is a minimal example of such. You start as a graffiti artist and your main goal is to get to the place you are tagging (avoid cops, ect), make your mark, grab the key that appears and move on to a more challenging level.

This takes a socially constructed idea of art on public walls as vandalism to a challenge to continually tag surfaces to move to higher levels in a game. Or therefore finding challenging obstacles or getting through those while passionately putting up your art much like Street Art Throwdown has recreated. This is true for other things as well, where you are given a photorealist version of a wall, train, ect and can digitally create tags or works of art.

“I try to display 20 to 50 pieces per city, which is already a good score. Sometimes I happen to return several times in the same city, deploying different “invasion waves” as I like to call them. The goal is to increase my score by continuously and restlessly invading new spaces.”